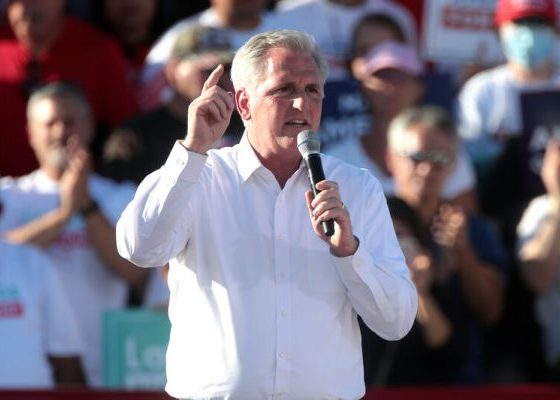 On Tuesday, one full week after the 2022 midterm elections, Republicans were projected to officially retake the U.S. House of Representatives after the win of Kevin Kiley in California. The move now puts the lower chamber of Congress in the GOP’s control and rips the gavel out of Democrat Speaker Nancy Pelosi of California’s hand. The races this election included many heated contests, with some significant GOP gains, including the defeat of U.S. Rep. Sean Patrick Maloney in New York, who served as the Democratic Congressional Campaign Committee chairman.

According to FiveThirtyEight, the elections of many Republican members means there are more Black Republicans in Congress now than in over a century. That included the wins of Reps. Byron Donalds of Florida, Burgess Owens of Utah, Wesley Hunt, Sen. Tim Scott of South Carolina, along with newly elected House members Wesley Hunt of Texas, and John James of Michigan. Herschel Walker of Georgia still has a December 6 runoff to add another name to the list, but the gains in the House were historic. Politico notes:

Republicans registered a series of big wins Monday night that all but guaranteed their House majority, even if it is increasingly looking like it will be a very slim win. In Arizona’s 1st District, GOP Rep. David Schweikert narrowly defeated Democrat Jevin Hodge, while Republican Juan Ciscomani, a longtime aide to Gov. Doug Ducey, beat out Democrat Kirsten Engel in the open 6th District.

Races were also called for Republicans in California, with Rep. Michelle Steel and Rep. Ken Calvert both winning in their Southern California districts. Republican Brandon Williams also won an open seat in a swing district in the Syracuse area of upstate New York.

Many of the last uncalled races are in California, which has historically taken longer than most other states to count votes. Republicans lead in three of them: Rep. David Valadao, Rep. Mike Garcia and Kevin Kiley are all ahead.

Republicans also have a small lead in Colorado’s 3rd District, with Rep. Lauren Boebert ahead by slightly more than 1,000 votes.

The move now leaves the Senate’s margin in the balance, with the December 6th runoff between Walker and Sen. Raphael Warnock determining how tight the majority will be in the chamber for Democrats. Republicans narrowly lost control of the chamber after Democrat Sen. Catherine Cortez-Masto was projected by many news outlets to have beaten GOP former state Attorney General Adam Laxalt. It is unclear if Laxalt will request a recount of the ballots. The only other U.S. Senate race still in the balance is Alaska’s seat held by Sen. Lisa Murkowski, who is being challenged by pro-Trump Kelly Tshibaka, who currently narrowly leads in the race.

In the House, Rep. Andy Biggs (R-AZ) challenged GOP Leader Kevin McCarthy of California for the role of the speaker but on Tuesday lost the bid 188-31 for the GOP nomination for speaker. Some unlikely allies have come to McCarthy’s aid, including Rep. Marjorie Taylor Greene (R-GA), who has said subpoena power by the GOP is critical with the newly minted Republican House majority. Now, McCarthy needs to get 218 supporters to vote for him to assume the role.

NBC News on Monday projected the GOP to take back the House with a razor-thin 219-seat majority.

Yebbut the House just ain’t enough. We must get rid of Mitch the Switch McConnell and the House is filled with quite enough RINOs to confound good initiatives. AND we have a Senate full of rabid DemoCreep Socialists and one inept figurehead pResident….WOW. Two more years of fighting like HELL and abject misery…

Let’s hope those numbers go up a little more so the left can’t over ride things. It will be great to not have this country’s biggest enemy, Pelosi, in charge of the house. At least it will give the American people a brake from her for at least 2 years. Maybe by that time she will be long gone from our government.

I can’t believe so many Americans are crying because they can’t afford food, houses and everything else but they voted for the same people that put us there.

So glad we stopped the insanity in govt.

Military pay substantial raise. Restart the draft. Conscription got me permanently disabled Republican. Happy we won I was so stressed.