Joe Biden, Dylan Mulvaney and the Collapse of the West

Home /Opinion/Joe Biden, Dylan Mulvaney and the Collapse of the West 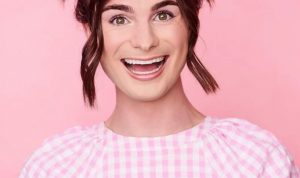 This week, President Joe Biden held an interview with a TikTok influencer named Dylan Mulvaney. Mulvaney is a man — a former Broadway star in “The Book of Mormon” — who less than a year ago decided that he was a woman. Ever since, he has made daily videos titled “Day X as a Girl.” These videos range from the stereotypical (on Day 1, Mulvaney announces, wearing drag, that he has cried three times) to the bizarrely cringe-inducing (on Day 120, Mulvaney analyzes his nipple size, which has increased from “cute little nipples” to “pepperoni nipples”). And they have earned Mulvaney in excess of 8.4 million followers along with makeup deals from CeraVe, MAC, Neutrogena and Kate Spade.

Mulvaney’s cosplaying as a woman also earned him an interview with the most powerful person on the planet. In that interview, Mulvaney asked Biden, “Do you think states should have the right to ban gender-affirming health care?” For those who are unaware of the medical euphemisms currently in practice, “gender-affirming health care” amounts to a slate of “treatments” including socially transitioning minor children, calling them by new names and pretending that they are members of the opposite sex; pumping minors full of cross-sex hormones and/or puberty blockers, with unknown long-term effects; progressing toward surgeries ranging from phalloplasties (fake penises attached to females) and mastectomies (removal of breasts) to vaginoplasties (removal of the penis and testes and creation of a fake vagina for males) to facial reconstruction surgeries.

Biden answered, “I don’t think any state or anybody should have the right (to restrict that). As a moral question and as a legal question, I just think it’s wrong.”

As a moral question, the president of the United States told a man dressed as a woman and engaging in the most idiotic stereotypical behavior that it would be a deep wrong to deny life-altering treatments to confused minors.

How did we arrive at this point in American life? How did our country decline to the point that a geriatric dotard, representing the global hegemon, can declare it immoral to prevent genital mutilation of young people in the name of anti-scientific “gender theory”?

The answer is obvious: traditional values are losing.

They are losing because the best defense of tradition is (SET ITAL) tradition itself. (END ITAL) And that defense has now been obliterated by a society dedicated to the proposition that tabula rasa quasi-intellectualism is a better policymaker than tradition. To state that we ought to abide by effective and useful age-old traditions is no longer seen as enough; we must come up with some sort of argument that fulfills the demands of Left-wing secular humanists. The burden of proof has been shifted from radicals who wish to tear down durable institutions — up to and including binary sex distinctions — to those who advocate for those institutions. Radicals need not explain how tearing down these institutions will create a better world. They need only criticize the existing arrangements as “intolerant” and “noninclusive.”

This is a recipe for societal collapse. Experience and wisdom are our teachers; destroying those teachers in the name of tabula rasa pseudo-rationalism is disastrously foolish. As FA Hayek observed, “Experience comes to man in many more forms than are commonly recognized by the professional experimenter or the seeker after explicit knowledge… The appropriateness of our conduct is not necessarily dependent on our knowing why it is so.”

That’s not to say that there are no secular humanistic arguments against the insanity of gender theory — there are, and they are convincing, which is why even moderate liberals have turned against the most radical aspects of the Left-wing agenda. But the fact that social radicals have been able to push so far so fast is disturbing evidence that our entire traditional framework of thinking and acting has been undermined.

It must be restored. The burden of proof must be on those who wish to destroy, not on those who wish to maintain. This means that Americans must have confidence enough to say, “It’s worked before, and it works still. I will not surrender it simply because you demand that I do so.”

Year 666 trillion! of It and Biden incinerating in the lake of fire and brimstone!

Dementia Joe continues to be a creepy old man.

What insanity. Lord save us from this evil.