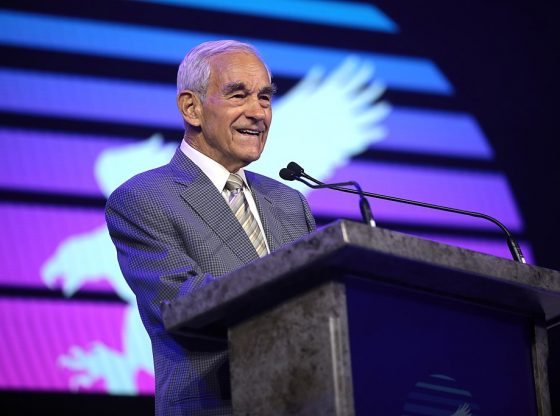 I dislike politicians. I don’t trust people who are so desperately eager to run others’ lives.

But Rep. Ron Paul is different. He wants government to leave us alone.

He promoted the benefits of limited government and free markets long before I’d even thought about them.

I first interviewed Paul in 2007. ABC News wouldn’t broadcast it. They only played it online. Now everything’s online. I like it better that way.

This week I released a new, longer video with Paul.

Paul ran for president three times, losing first as a Libertarian — and then twice as a Republican. The second time, he won 10% of the primary vote.

I then thought Americans were finally coming to appreciate libertarianism. The New York Times Magazine even asked, “Has the ‘Libertarian Moment’ Finally Arrived?”

That was the kiss of death.

Libertarian candidates now get fewer votes than Paul got in 2012.

“Did you make progress?” I ask him.

Paul says his goal was to get people to think about freedom. He’s succeeded there, at least somewhat.

Paul first got politically active in 1971, when President Richard Nixon took the U.S. dollar off the gold standard.
“The money issue touches every aspect of liberty,” says Paul. “If you’re inclined to think that we’re in too many wars, well, there wouldn’t be — if they couldn’t just print money for it.”

His presidential campaigns brought attention to the Fed, and the liberty movement, especially from young people. In fact, Paul came in first place among young people in almost every Republican primary.

But now Sen. Bernie Sanders is most popular among the young. I remind Paul, “young people today say they prefer socialism to capitalism.”

Although Paul was always anti-war, after 9/11, he joined the congressional majority and voted to send soldiers to Afghanistan. He wanted to find and punish the people responsible for the attack and get right out.

“That did not mean (America) had the authority to occupy and try to transform Afghanistan,” says Paul. Yet that’s what American politicians tried to do.

In a 2007 Republican presidential debate, the audience booed Paul when he suggested that the U.S. was attacked  because “we’ve been bombing Iraq for 10 years … what would happen if somebody did it to us?”

Then he wasn’t paying attention. Osama bin Laden long complained about Westerners occupying the Middle East. “Expel them in defeat and humiliation from the holy places of Islam,” he wrote.

Posting American soldiers in other people’s countries is certainly a serious provocation. I’d be mad if Chinese soldiers patrolled my street.

But today American politicians still want to police the world. The United States has 750 bases in 80 countries. Paul calls the military industrial complex “the most deadly PAC.”

Last month, President Joe Biden sent 3,000 soldiers to Eastern Europe saying, “As long as (Putin’s) acting aggressively, we are going to make sure we can reassure our NATO allies and Eastern Europe that we’re there.”

“That’s garbage,” Paul responds. “By what right do we go over there? There’s no national security. We had troops in Saudi Arabia for national security and look at what that brought … it has nothing to do with helping Americans, except those who might get a better paycheck.”

I push back. “President Biden would say, ‘We have to go there just to deter Russia. If we don’t, we’re inviting them to invade other countries.'”

We shouldn’t let government scare us into going to war, says Paul. “Fear is the tool of totalitarians.” Paul’s anti-war arguments have shifted public opinion. Today we might be fighting in Ukraine if it were not for Ron Paul and his warnings about the risk of America policing the world.

…is qualified and honorable enough to be POTUS